Here we go again, another week, another reason to be butthurt about something. The hypocrisy is strong with this page and the admins that run it. Our Facebook page specifically states no butthurt but we are gamers after all, so we can’t help it. Seriously though, stop reading now if you don’t want to waste 5 minutes (realistically only about 2 minutes) reading the incoherent ramblings of a madman.

So, what are they whining about this time I hear you ask? Butthurt. Yes, I’m butthurt about butthurt. More specifically, I’m sick of gamers’ opinions and the negativity in the gaming community (kind of ironic given the tone of this piece but walk with me a while). Let me paint a picture for you:

There I was, sitting at work, trying to look busy, trolling through gaming websites and forums. I stumble across a wild gamer, talking about AC: Syndicate (funny that our last butthurt piece was about the AC franchise but that’s not the focus of my butthurt (well it is but just not right now)).

Wild gamer says: “Do you think it looks different enough? Syndicate looks like Unity with horse carriages bolted on.”

I reply: “I don’t understand why gamers keep buying these, talk about flogging a dead horse.” Every man and his Digimon responds with: “Don’t buy it if you don’t like it,” and “No need to hate on the people who like it,” and my personal favourite: “You probably like shit games like Zombie Army Trilogy you flog.” Just for the record I didn’t play ZAT but I am a flog so would probably enjoy it.

It’s the same everywhere you go; gamers are jumping down other gamers’ throats because they hold an opinion on something that doesn’t exactly match their own. It appears to me that unless you agree with the majority on IGN, you have no idea what you’re talking about.

I have been gaming for over 20 years, I’ve owned every system under the sun and I like to think I am at least half decent at a handful of genres. So why is it, when I hold an opposing opinion on something, I am immediately dubbed a “hater” (*shudders*) and told I’m a flog? Well I’ll tell you: It’s because gamers are shithouse. We’re a bunch of sooky, whiny little bitches that sit in our dark rooms jumping on anything that makes us feel bad about our pathetic lives. We’re introverted, shy, and ugly and have no confidence to face the real world so we attack anyone who makes us realise we’re just shithouse. All jokes aside, the power of anonymity online brings out the absolute worst in people. The reality is; most gamers are actually just normal people with jobs and families. All too often any criticism for something is seen as an attack on the person who likes said something rather than an attack on the thing itself.

So what do we do about it? Do we play single-player at all costs and shut ourselves away from the trolls and neckbeards? Do we stop gaming and immerse ourselves IRL? Not a fucking chance. We crack on doing exactly what we’re doing because we love it. We love to hate and that’s what’s wrong with us. It is also what is so right with us! At worst we are slightly unhinged to be arguing with such vim and vigour about something that many consider to be a childish distraction. At best we are unrivalled in our passion for a culture which to us is infinitely alluring and deeply satisfying.

If you’ve made it this far you are probably the type of person I am talking about: You’ve gone to an article without 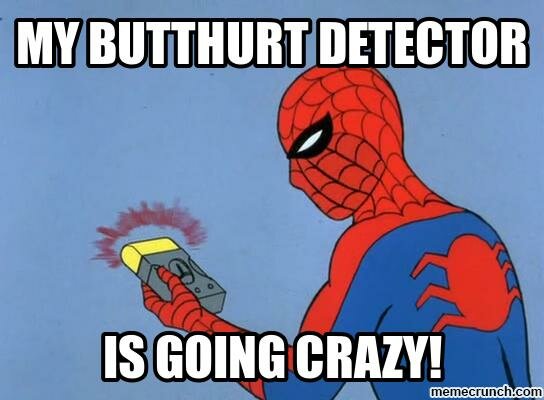 reading anything but the title and gone straight to the comments section. You’ve clicked on things you’re not interested in but you know will have a toasty flame war going on. Maybe you’ve commented and stoked the fire.
Maybe like a creepy uncle you’ve lurked and simply watched the fireworks as the mindless peasants gabble over resolution. Maybe you’ve corrected someone’s grammar. Be you troll or just honestly and openly opinionated, saddle up your high horse, grab your pitchfork and flame shield and leave a comment below and tell us your experiences with the butthurt gaming community at large.

By John Gray
Probably the brightest and best looking contributor to DYEGB, John spends his time buying and ultimately not finishing any game. When he’s not doing that he’s going back into the website settings to add words to his profile because the other admins wrote more and he feels inadequate. John enjoys any and all games unless it requires patience and skill.