It’s been a long time between drinks for issues of Second Chance Saloon and today we’re back from hiatus with two IPs that graced the PS2 and original Xbox. 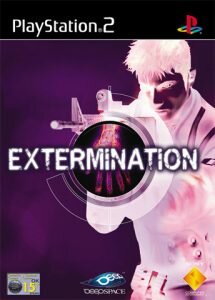 Back in 2001, Sony released the PS2 exclusive, Extermination – a survival horror game set inside a research facility in Antarctica. Like all good isolated research stations, the road to hell is paved with good intentions, and what starts as the noble pursuit of knowledge quickly descends into unmitigated catastrophe. You play as Sergeant Dennis Riley of the U.S. Marine Corp’s Force Recon – the unit that responds to the distress call at the Fort Stewart research facility. What Riley and co. find on their arrival is your typical research gone wrong scenario, with the facility overrun with infected humans and mutations.

Extermination is redolent of juggernaut survival horror series, Resident Evil, however the developers at Deep Space added a little more variety to the survival horror formula. Like early REs, Extermination is a third-person shooter with an emphasis on ammo conservation, as ammunition for both primary (assault rifles) and special weapons (shotguns, rocket launchers) is limited in supply. Several enemy types are akin to the modern day bullet sponge; often requiring large amounts of lead to take down. This forced players to pick and choose their battles when they could.

A neat gameplay feature was Dennis’ infection level meter. In addition to causing Dennis damage, enemies could also infect Dennis and when the infection reached 100%, Dennis would mutate and perish (RIP). The only way to stop the infection increasing was to heal your infection at an MTS bed machine with the rare MTS vaccine. Aside from this, Extermination’s gameplay was relatively generic, however despite this the game was decent and I remember it as one of my more enjoyable PS2 experiences (I’ll admit I am a tad biased towards survival horror games).

Even though it has been a while since I played Extermination, I remember the game’s story being satisfactory, however like a lot of older games the game suffered from laughable voice acting which lessened the severity of the situation Big Dennis found himself in. I do remember the soundtrack being quite solid and helping build the immersion, as well as the locale’s atmosphere being well-designed.

Extermination was met with mixed reviews on release. It currently has a rating of 67% on Metacritic, with Joe Fielder of GameSpot saying: “It’s far from being poor and is certainly entertaining at times–it just lacks the originality and extra level of polish needed to provide a truly memorable gaming experience.”

If Sony were to revive the Extermination IP, I think I’d want to see a total reboot of the game instead of a remaster/remake. Unlike reboots for more prolific Sony IPs such as Tomb Raider and Devil May Cry, a reboot for Extermination would benefit (in my opinion of course) from a brand new premise with an all-new cast of characters, especially no one called Dennis (no offence to any Dennises out there). The only aspect that should transition from the original to any reboot is the Antarctica location, as aside from Lost Planet very few series are set in desolate icy wastelands, but the isolated nature of such a location lends itself perfectly to survival horror. I also believe the game should remain a single-player only campaign and have a similar vibe to the first two Dead Space releases. Perhaps include additional modes to boost replayability, but the crux of the game is better experienced solo.

In terms of developers that could bring Extermination to PS4 (assuming it would be a PS4 exclusive), there are two options in my head. One is a first-party developer, while the other is a third-party developer that has worked with Sony numerous times.

First-party wise I can see the Sony-owned Bend Studio (Syphon Filter & Days Gone) perhaps doing something interesting with the IP. They have third-person shooter pedigree with the Syphon Filter series, so their ability to develop an action-packed experience is not in doubt. Bend are currently developing the PS4 exclusive, Days Gone, which is a Last of Us/Sons of Anarchy hybrid, which will give them a taste of developing a game with survival horror elements – something that any future iteration of Extermination must have.

The second development team that I believe could make something out of the Extermination IP is Ready at Dawn, who are more known for the infamous PS4 exclusive The Order: 1886 than their previous well-received works. Why RAD you ask? Well, first and foremost, a survival horror game must have an excellent and immersive atmosphere and sound design. Making the player feel some sort of trepidation in action-horror experiences is one of the hardest challenges for developers, which is probably why we see a lot of first-person horror games in the ilk of Outlast and Alien: Isolation

Syphon Filter is a classic

Even though The Order was critically panned, almost every critic praised the game’s visuals, sound design and the attention to detail in the game’s alternate steampunk Victorian London setting. In order (I couldn’t resist) for Extermination to be a quality horror experience, it needs to have an immersive and intimidating setting – something that RAD are more than capable of delivering. However, while they may be able to deliver lifelike visuals and a top-notch soundscape, many would have reservations at their ability to deliver a game which is actually rich in terms of gameplay. I have no doubt RAD would have learnt what works and what doesn’t from the feedback they received for The Order, a game that I enjoyed immensely despite the terribly executed half-breed aspect.

If Extermination were ever to be resurrected, I hope that whichever developer is entrusted with its creation maintains its survival horror nature and doesn’t just make another typical action game, a la Capcom RE5 and onwards. 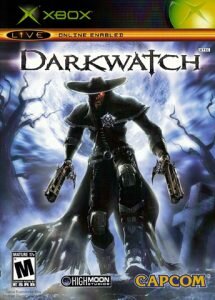 In 2005, Capcom and Ubisoft co-published Darkwatch (Capcom in North America and Ubisoft in Europe and Australia), a first-person shooter set in 1876 in an alternate steampunk Wild West developed by High Moon Studios.

In Darkwatch, the player assumes control of Jericho Cross, an outlaw-turned-vampire-cum-vampire-hunter, who joins the ancient vampire-hunting order known as the Darkwatch. Jericho’s affliction causes him to question himself and the player is left to choose what path Jericho will walk down. Will Jericho embrace his vampiric desires? Or will he fight for what remains of his humanity?

The story begins in Arizona, 1876, with Jericho attempting to rob a train belonging to the Darkwatch. Unbeknownst to Jericho, the train is transporting captured vampire lord, Lazarus. Jericho releases Lazarus by mere happenstance and as a result is bitten and left to turn by the vampire. The Darkwatch escort him to their HQ and here Jericho agrees to give his services to the age-old hunting union.  His task is to track down and defeat Lazarus, something that will be no easy feat. Along the journey, Tala from the Darkwatch convinces Jericho to turn her into a vampire. After being bitten, Tala betrays the Darkwatch and leads undead enemy to Darkwatch’s doorstep. After the final donnybrook with Lazarus, Jericho is forced to choose where his allegiances lie; are they with the Darkwatch or are they with Tala?

Players were awarded different powers (or ‘brands’ as they were known) which enabled Jericho with varying abilities such as dealing additional damage (Silver Bullet), summoning lightning bolts (Vindicator) and recruiting the undead as allies (Turn). Another unique gameplay feature was the fact that these acquired powers could only be used at night, and during the day Jericho’s arsenal was restricted to the weaponry of a mere mortal, such as a crossbow, rocket launcher and the exotic 24-clip handgun.

Don’t mess with a man with a crossbow

What is your quest?

Other gameplay features saw Jericho given basic vampire traits such as double jump, heat vision that allowed Jericho to identify targets and a regeneration shield. There were also sequences were Jericho rode a horse and carriage, this changed the camera view from first-person to third-person. Thankfully Jericho’s steed was a bit more competent than Roach (from The Witcher 3).

The Xbox version of the game shipped with an online multiplayer mode for up to sixteen players, as I owned it on PS2 I never got to experience the online MP, however the PS2 came with a local MP mode which if you owned a multitap, up to four players could play. The MP is made up of your stock-standard modes (TDM, CTF etc), except for the Soul Hunter mode, where players race to fill up their blood meters. The PS2 did get one-up on the Xbox, with the campaign being co-op enabled on Sony’s console. However, the co-op campaign was a jarring experience as neither player 1 or 2 played as Jericho, yet he was in the cutscenes…

Darkwatch received mostly positive reviews with the PS2 version sitting on 74% on Metacritic, while the Xbox version is on 75%. Game Informer wrote: ‘In terms of gameplay quality, this may be another middle-of-the-road shooter, but the unique premise sets it aside from everything else out there.’

I would love to see a remaster (full remake) of the original on current-gen consoles and PC, with maybe a few new flavours added for garnishing, such as some additional guns or powers. It would definitely be better served with a stronger multiplayer aspect. I think in the best interests of the campaign, dropping the co-op aspect is the best move. A bigger, slightly more open level design would also be a boon to any remake.

Given that it was a joint publishing venture, I’m not entirely sure who owns the rights to the game’s IP, but for the sake of this article I am going to say Ubisoft, purely because I am from Australia (and they published it in our region, remember?).  Out of all of Ubi’s studios, I think the team most likely to bring tears of joy to any remake would be Ubisoft Montreal (UM), for the simple fact that they have worked on the majority of the Far Cry series.

While their Far Cry releases might be from the same formula sheet, it would be good to see what the UM team could do when they don’t have to work off the same blueprint. Their games have always been mechanically sound, if a bit generic. I have full confidence in UM being able to deliver a remake that hopefully gives Ubisoft another popular IP.

Got any thoughts on the two titles I’ve chosen? Let me know in the comments.

Zach Jackson
Currently studying a Masters of Communications, Zach paradoxically finds himself writing about video games more than actually playing them. He’s one-half of the musical project, the midnight bloom and an avid Chicken Wing Enthusiast that supports the San Jose Sharks, Carlton and Burnley FC. Get around him on Twitter @TightInTheJorts

The Division Beta Delayed Until Early 2016

DOOM Tops The Charts For The Week Ending May 22

Please say it's so

A Day with Pokémon Go

Let's see what kind of Poké-trouble you can get up to in a day.

Pokémon GO will definitely kill you. Will it be in one of these scenarios?

Tune in or get rekt

Platinum’s Games: The Standouts and Disappointments

Prey for the Gods Goes On Kickstarter

Go back it, right now!

Evolve Is Now A Free-To-Play Title

You won't have to spend your money on Evolve, only your time

Which star will get your vote?

DOOM Is This Week’s PSN Deal of the Week

Tickets to Hell are on sale this week

For the glory of Egypt

Is Blizzard’s Twitter Teasing A New Hero For Overwatch?

More justice raining from above?